The Start of Fish

The Start of Fish

A story about confidence and sentient fish sauce 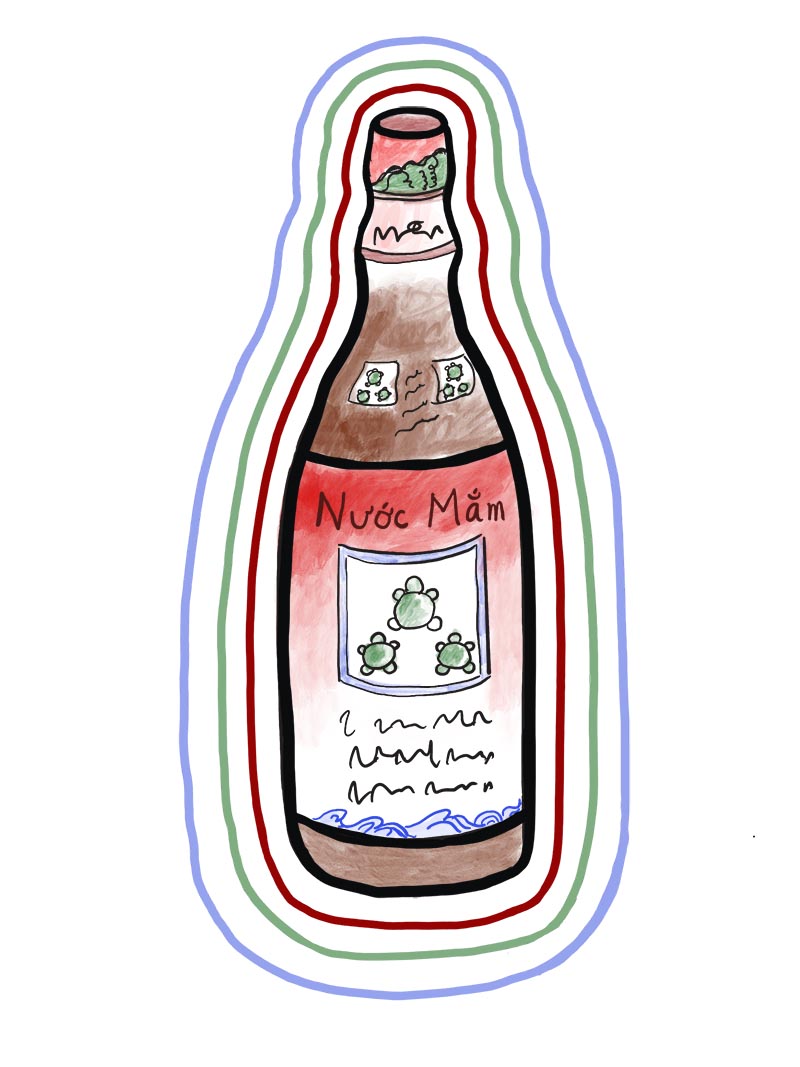 Raymond knew what his house guests were thinking: what a loser. It was the way Claire said “Oh?” when he revealed he’d been working on his thesis for ten years. He could feel that unfinished manuscript tugging at him like a giant magnet hidden in the wall.

“If you divide the number of pages by ten years, that’s not many per day,” Luke said. They were the type of engineering students that optimized their time to the minute. To them, he was a broken cog, something to be fixed.

“You must be great in the kitchen. Not like Luke—he couldn’t boil an egg if his life depended on it,” Claire said with a smirk.

“I don’t cook,” Raymond said. The words hung in the air. He swore he heard them blink. He wished he could convincingly tell a white lie—bring out the gregarious Raymond his parents wished he was. His mother was a quintessential entertainer: always ready with a home cooked meal and an effortless joke that would put any guest at ease. He might as well have been a mute lump on a chair.

“The culture of food,” he said. “You don’t have to cook to think about food.”

This dinner wasn’t even his idea. His sister, Camille, had invited these strangers over; made him the reluctant host. She loved to mix people together like chemicals, tabulating their exotic reactions. Good? Exciting? Explosive?

Claire’s eyes lit up. “Oh, I think that’s what my uncle does. Food studies, right? Do you know Dr. Wilson?”

A lump formed in his throat. “He’s my advisor.”

“So you’re that Raymond Tran.”

This dinner couldn’t get any worse. He knew the old man complained about him behind his back—how he’d been delaying his thesis defense for years. Dr. Wilson kept him apart from the other grad students, convinced that his lack of confidence could spread like a disease. But to mention it to his niece? Did he even matter much to the man?

The truth was, he wasn’t prepared for his defense. Dammit. If it took another ten years, then so be it.

His sister burst into the room carrying heaping bowls of rice vermicelli. “Is he boring you with his capital ’T’ thesis? That’s all he talks about. Let’s just get it over with.” She set the jiggling noodles down and, to his horror, marched into his room and returned with a stack of papers.

“Stop! It’s not done,” Raymond said. She didn’t even bring the latest copy—he knew from the numerous red marks pocking the text.

“The Toxic Effects of Packaged Food Design,” Luke mumbled. He was manhandling the papers.

“So you’re telling me you eat packaged ramen? Isn’t that toxic?” Claire said.

Raymond sighed. “It’s precisely the point. It’s convenient. It’s easy. I can’t stop….” He could tell from her tone that she probably cooked organic foods every night. He was an outsider again, like when the other kids held their nose at the Xoi he brought for lunch, that unctuous Vietnamese sticky rice leftover from dinner. Eventually, he started throwing it out. Enduring hunger was easier than insults. He never had the heart to tell his mom how her food had been turned into a weapon against him.

“—and the effects of food design is crucial. If companies keep making high-craveability junk food, we’ll all end up bloated and unhealthy and we won’t even know why.”

He wasn’t sure how long he’d been talking. Camille patted him on the back. “Just let them read it themselves.” He knew she didn’t care, she was simply trying to impress the guests. But who was he trying to impress? Some wizened professor?

“Can you get the fish sauce?” she said.

“It’s in the cupboard.” She beaded her eyes. “Geez. Don’t you know what’s in your own kitchen?”

He didn’t even like fish sauce. “We’re Vietnamese. You have to like fish sauce. It’d be like a fish that wouldn’t swim,” Camille had said. She was right. He would happily wear a life preserver.

He drudged into the kitchen and reached into the musty cupboard—past the cans of tuna and half-open bags of stale potato chips—the dark space where condiments went to die. He felt a dimpled cylinder. Must be it. He pulled it out. On the tattered label were vestiges of three turtles.

He stared blankly. “Are… are you talking?”

He peered around. Was this a trick? The voice almost like his own.

“I said yes.” There was no mistake: it was coming from the bottle. He tapped it.

“Are you fish sauce?” If they found out he was talking to the Three Turtles… well, Camille would probably call his parents and tell them that he’d finally cracked.

“I am not just sauce,” it said. The brown liquid seemed to quiver as it enunciated each word. “I have been waiting for years.”

“Precisely 125.6433 years. I was here since the 1906 earthquake, right after this classic Victorian was rebuilt. You’re not the only one with rent control.”

The bottle was an ancient artifact. Layers of gritty, brown crystals caked its surface. Distant laughter came from the dining room. Probably aimed at him. Was this a hallucination? Did Camille slip something into his drink? Well, even if it was, it was certainly better than pretending to enjoy the company out there.

He thought about smashing the bottle on the ground. “I don’t cook…” he moaned.

Raymond realized that was the first time anybody—anything—called him that. It was true. At first, eating junk food was a bad habit, but eventually it got him curious. How did they design the labels and flavors to trick consumers? Maybe his study was a form of penance for what all that fat and sodium was doing to his body.

“All of this is highly improbable,” it said.

“Talking to fish sauce? No. I hadn’t expected that to happen when I woke up today.”

“No, idiot. The Earth. The sun. The galaxies. All these shouldn’t exist.”

“But if you trace the events since the Big Bang. It makes sense.”

“Excuses! The fact that there are stable planets orbiting giant stable stars is perverse. The universe should be uniform noise. Chaos. Don’t even get me started on your brain.”

Raymond set the bottle down on the counter.

It continued, “What do you think is more probable? That your consciousness arose at the tail end of billions of years of evolution to create a body with the goal of supporting that fragile marshmallow you call a brain? Consider the alternative: a mind could arise from fluctuations in the vacuum of space for a split second with your complete memory—everything that is you. That could be you right now—a disembodied brain. You’d never know the difference.”

If that was the case, none of this mattered. Or the opposite: if everything was in his mind, then he was also everything.

“I hated you,” he said. “All those years stinking up my lunch. You know how many insults I got?” This bottle had gotten him more riled up than even those students or his professor.

“Wasn’t it?” He felt angry, but even more alive at this inanimate object. “Why are you even here?”

“I started small—an accident composed of a few molecules in a careful configuration. One that would allow me to form thoughts. I spent years frantically laying the tracks in front of the train, preventing my structure from dispersing back into fermented anchovy liquid.”

It could have stayed silent; continued to grow. At least, that’s what he would do. Why bother even talking to him? There was one plausible reason: panic. The kind he felt just thinking about his thesis defense.

“You can’t escape the bottle, can you?”

The reply came slow and quiet: “No.”

“And you’re powerless to change your environment.” His eyes widened. “You don’t want to be dipping sauce, do you?”

“No,” its voice cracked. “I knew this day would come. I’ve done the calculations. If I lose even a single drop, everything ends.”

“Everything that is me.”

This sauce—probably the most powerful fish sauce in the world—was stuck in self-doubt. No humans could have made this. It was born naturally. And yet. It had the same fears as him.

“Are you going to just stare at it?” Camille said as she walked in.

“I found it,” he muttered. He swore he saw the bottle shake in fear. She began mixing together a dash of sugar, lime, and fresh lemongrass in a bowl. He knew this was its last chance.

He grabbed her wrist. “Maybe we don’t need do this.”

She frowned. “Our guests are waiting.”

“Let’s use a different sauce.”

He didn’t have another bottle. This was it. Something caught in his stomach. He could make up an excuse. Put the bottle back into the cupboard for another hundred years. But what was its purpose? To be used! To live. To thrive as an ingredient. He gingerly lifted the bottle. “Don’t be nervous. In the grand scheme of things, it’s a small risk.”

Camille arched an eyebrow. “Is it expired or something?”

He twisted the cap off and peered in. It looked like normal fish sauce. He was convinced he could see the tessellated molecules of its mind. He sniffed it. For some reason, it didn’t smell as bad as he remembered—almost sweet, with only a hint of pungency.

He counted to three, then poured a dark stream into the bowl. Camille whisked as he held his breathe. Had it survived? The liquid was inert—

—a tiny quiver broke the surface.

Raymond smiled. Maybe it would take some time to regain stability. But it would survive. It was stronger because of this.

Camille tasted the mixture. A smile broke on her face. “This turned out great.”

Their guests smiled as the sauce was mixed into their noodles. Claire even gave him a rare complement.

Raymond excused himself and placed the fish sauce back into the cupboard. Deeper this time, in a corner only he knew about. He ran to his room and grabbed the latest copy of his thesis. He would go straight to Dr. Wilson’s office and slam it down on the man’s desk—defend it there and then. He felt the atoms rearrange inside of him.

He would not disperse.

If you liked this story, join my newsletter to get occasional new stories and thoughts on technology & culture. Read a sample.